James' research has dealt with understanding the structural properties of antibodies to help improve modelling and inform engineering of these therapeutically important molecules. To aid these goals he developed a database (SAbDab - Dunbar et al 2014. NAR) to collect, curate and present all publicly available antibody structural data. Last year he spent time at Roche’s Penzberg site integrating SAbDab with their in-house structure database. He has also visited UCB where SAbDab is also in use and forms the basis for their in-house antibody structure modelling platform.

He is particularly interested in how the orientation between the antibody variable domains, VH and VL (left), affect antigen binding properties. He has published a method and computational tool to analyse this property (ABangle – Dunbar et al 2013. PEDS). ABangle is used at both UCB and Roche and in the antibody structure modelling community (Almagro et al. 2014. Proteins). He has also co-authored a study that used the tool to study structural dynamics of TCR-pMHC complexes (Knapp et al 2014. PLoS Comp Bio).

His most recent work has been to compare variable domain orientations in antibodies to the analogous property in T-Cell receptors. In his recently published paper (Dunbar et al. 2014. PloS Comp Bio) he shows how variable domain orientation should be an important consideration when rationally designing therapeutic antibodies that are specific for T-cell epitopes. In July he gave a talk at the 3Dsig conference in Boston, USA and also won the best poster prize. ABangle maps a coordinate system onto the antibody VH and VL domains. This allows their relative orientation to be investigated.

When investigating the causes of a complex disease, a standard approach is to find genes which have differential expression patterns depending on whether or not test samples exhibit the disease phenotype. These differentially expressed genes are regarded to encode for proteins which are relevant to the underlying biological process. While important individual proteins may be discovered via this approach, the biological function or pathway which is regulated by these proteins cannot be understood without the context in which the proteins act to perform said function. My research is targeted toward providing this functional context by identifying biological modules in protein interaction networks (PINs).

A biological module is a group of interacting molecules which perform a common function and is regarded to be an important organizational scale in biology [1]. This project builds upon results obtained by Lewis et al. [2] showing that functional communities in yeast PINs can be identified at multiple scales. We aim to identify these functional modules in human PINs and use them as a biological vocabulary for understanding the function of differentially expressed genes.

The effect of a resolution parameter in community detection. The circles represent communities and the lines denote edges between them. The size of a circle, or a line, is proportional to the community size, or the number of edges between two communities, on a logarithmic scale. The three graph representations show network partitions generated at different resolutions by the configuration model Louvain community detection method implemented on HINT-P-14.

A long term aim for this project is to be able to identify activated pathways in phenotypes which are investigated via gene expression profiles. This represents an important step from identifying genes linked with a disease phenotype, to producing biologically testable hypotheses of pathways that may cause a phenotype.

My D.Phil research focuses on the study of ligand binding thermodynamics. In particular, we are interested in the use of computational methods to predict affinities of small molecules against the epigenetic target family of bromodomains. Bromodomains are epigenetic mark readers that specifically recognise ε-N-lysine acetylation motifs and have been found in 46 human proteins. Acetylation is often found on histones, where altered acetylation levels have been linked to aberrant transcription in cancer and inflammation. [1]

Structural information is the starting point for molecular dynamics (MD) simulations and free energy calculations, while isothermal titration calorimetry allows us to validate the methodology against high quality binding data. We would like to be able to accurately predict binding affinities for different compounds, along with possibly anticipating the effects of chemical modifications on binding entropy and enthalpy, and contribute to the development of novel bromodomain inhibitors. 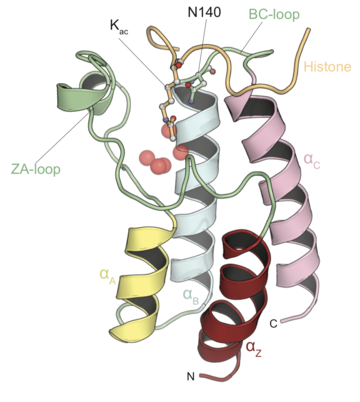 Bromodomain fold and acetyl-lysine binding pocket. (a) Cartoon representation of the structure of BRD4(1) bromodomain in complex with an acetylated peptide. Crystallographically observed water molecules are represented as red spheres.

Current efforts are focussing on the evaluation of the accuracy of free energy perturbation methods based on all-atom MD for the prediction of affinities against the bromodomain BRD4(1).[2] The preliminary results of this study have been presented in a poster during a conference on Free Energy Methods in Drug Design in Boston in May 2014.

Tandem pore domain potassium (K2P) channels play important roles in the human body, being responsible for the leak potassium current that maintains membrane potential. Recently, the structures of 4 members of this family of channels have been elucidated via X-ray crystallography and we are now able to look at ligand binding with purified protein, something which was not possible until recently due to the difficulty in obtaining sufficient quantities of protein. This project is an attempt to characterize the biophysical methods commonly used in the pharmaceutical industry on K2P channels.

Comparison of Structures of TREK1 and TREK2. The 2 channels are very similar in their structures. The main differences are the shifted extracellular cap, distortion of the TREK1 pore when compared to TREK2 and N-terminal shift of M4 helix (Pike A., unpublished work).The extracellular cap is indicated as EC1 on the figure.

To date, I have successfully developed the use of Differential Screening Fluorimetry on the screening of known binders of K2Ps. The ligands norfluoxetine and penfluridol have been seen to exhibit an effect on the thermostability of TREK-1 and TREK-2. I have also attempted the use of Biolayer Interferometry and Isothermal Titration Calorimetry for the direct detection of binding between TREK-2 and the ligands above and these are in the process of optimisation. Other methods which are in the pipeline to be screened include Microscale Thermophoresis and Surface Plasmon Resonance and the mechanism of ligand binding will be looked at when this is shown by biophysical methods

Modelling the Interplay between Biophysics and Intracellular Computation in the C. elegans Germ Line

My research involves developing fully three-dimensional computer models of populations of interacting cells. These models include both the mechanical forces acting between cells and a decision-making ‘program’ inside each cell. The aim is to investigate collective cell behaviour and development; testing hypotheses about how cells behave by seeing whether a particular single cell model leads to correct properties at the tissue or organ level. In particular, for my DPhil, I am working on simulating the C. elegans germ line: a powerful experimental system used to study stem cell proliferation and differentiation.

I have developed a cell-based mechanical model of the germ line, using the C++ library Chaste [1]. As part of this I extended the core functionality to allow a Statechart to control the behaviour of individual cells. Specifically, I use a Statechart model based on that in [2] to prescribe how germ cells divide or differentiate in response to certain signals. Over the past year, in direct collaboration with Prof Jane Hubbard at NYU, I have focussed on improving the model’s fit to experimental data, using images of germ line development, as well as data on the germ cell cycle provided by Prof Hubbard’s group. 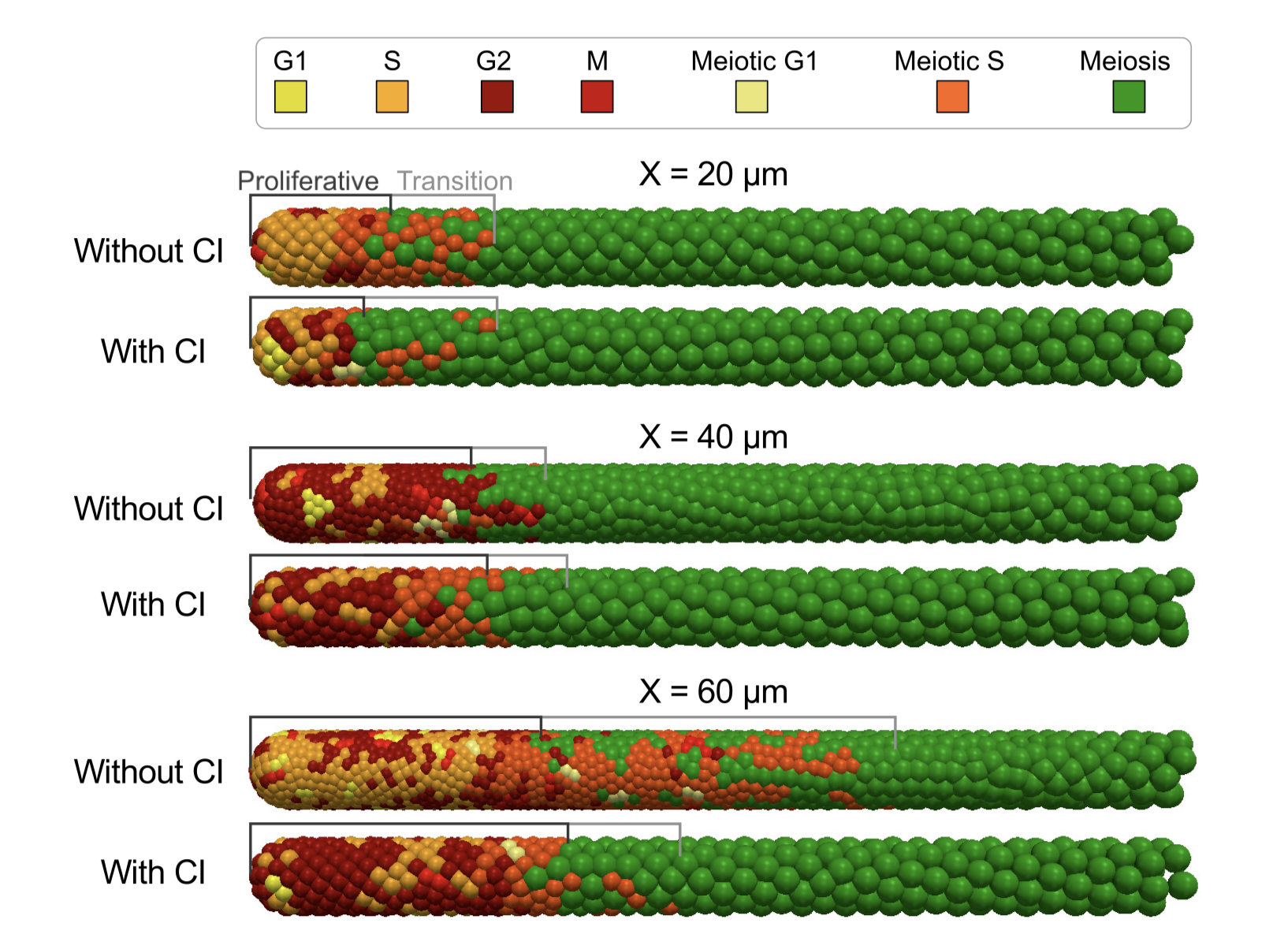 Snapshots of the equivalent germ cells model, run using different values of X, either with or without contact inhibition (CI). The images above show the distal germ line after 100 hours, with germ cells coloured according to their cell cycle state. Increasing the range of the DTC signal increases proliferative zone length, while adding contact inhibition reduces it. Setting X = 40μm gives the most realistic appearance of the parameter sets tested.

I have also worked on making my model available as a web app, the prototype for which I demonstrated at a 2020 Science workshop and at the MSR Technology Advisory Board meeting. In June, I attended the Lindau Nobel Laureate Meeting on Physiology and Medicine.